IBRiS survey: Poles are most motivated to save electricity by reducing costs 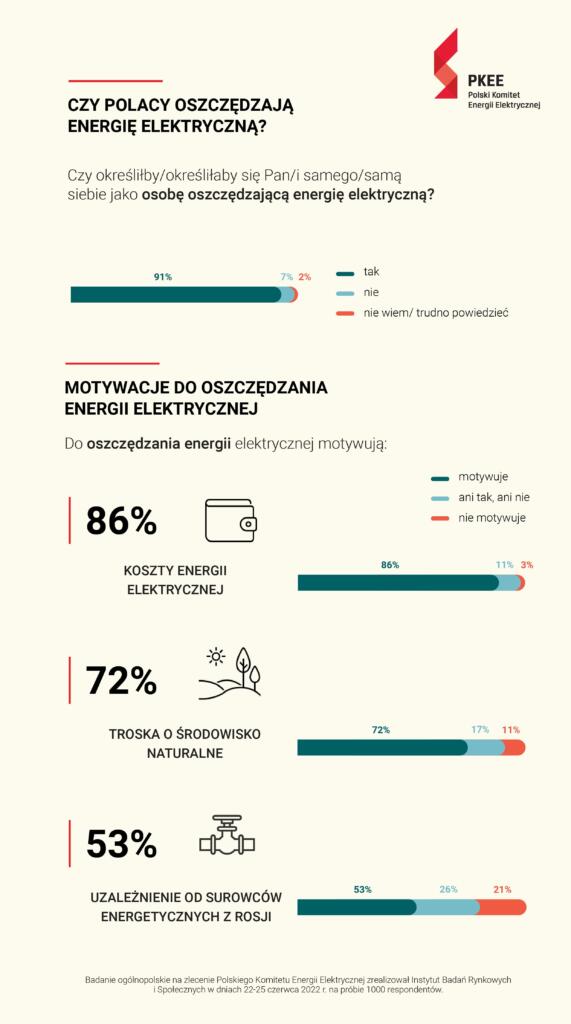 The crisis in the electricity market caused, among other things, by the cost of purchasing carbon allowances, the height of raw material prices, but also Russia's aggression against Ukraine, is increasingly being felt by households across Europe. These factors result in a growing awareness in society of the rational use of electricity and the need to reduce its consumption. This is confirmed by the results of an IBRiS survey commissioned by PKEE.

As many as 86 per cent of respondents are motivated to save money by the amount of their electricity bill. Eleven per cent have no opinion and only three per cent are not motivated by the cost of electricity. On the other hand, 72 per cent of respondents declare that they take a rational approach to energy use out of concern for the environment. However, for 1/10 of Poles, being eco-friendly is not a sufficient argument for switching off the lights. Reducing electricity consumption out of concern for the environment is more important for women (77%) than for men (66%).

- At this difficult time for everyone, we should, as far as possible, take the new realities into account in our daily choices. The rational use of electricity should become a common attitude. According to the latest research - awareness in this area is already high among 91 percent of the population, but we can always do more. That is why the Polish Electricity Association has for several months been conducting a nationwide educational campaign entitled "Energy counts", which informs how, by simply changing our daily habits, we can reduce energy consumption and, as a result, lower our electricity bills. - says Magda Smokowska, Advisor at the Polish Electricity Committee.

In the context of recent events, respondents were also asked about independence from Russian raw materials. More than half of the respondents (53 per cent) try to use less electricity for this reason, for 21 per cent this is not a motivating factor. In contrast, one in four respondents has no opinion on the subject.

- In the current situation of rising fuel prices, Russia's aggression against Ukraine, inflation and CO2 costs, energy prices are rising worldwide. This is a heavy burden for citizens and businesses, but is not followed by extraordinary benefits for the energy industry. Electricity will certainly be more expensive in 2023, which is why it is so important for all of us - coal producers, energy companies and energy consumers - to approach this issue responsibly and in solidarity. It is therefore already worthwhile to take a rational approach to energy consumption and simply start saving energy, so that increases will be less noticeable - said Wojciech Dąbrowski, RZ President of the Polish Electricity Committee.