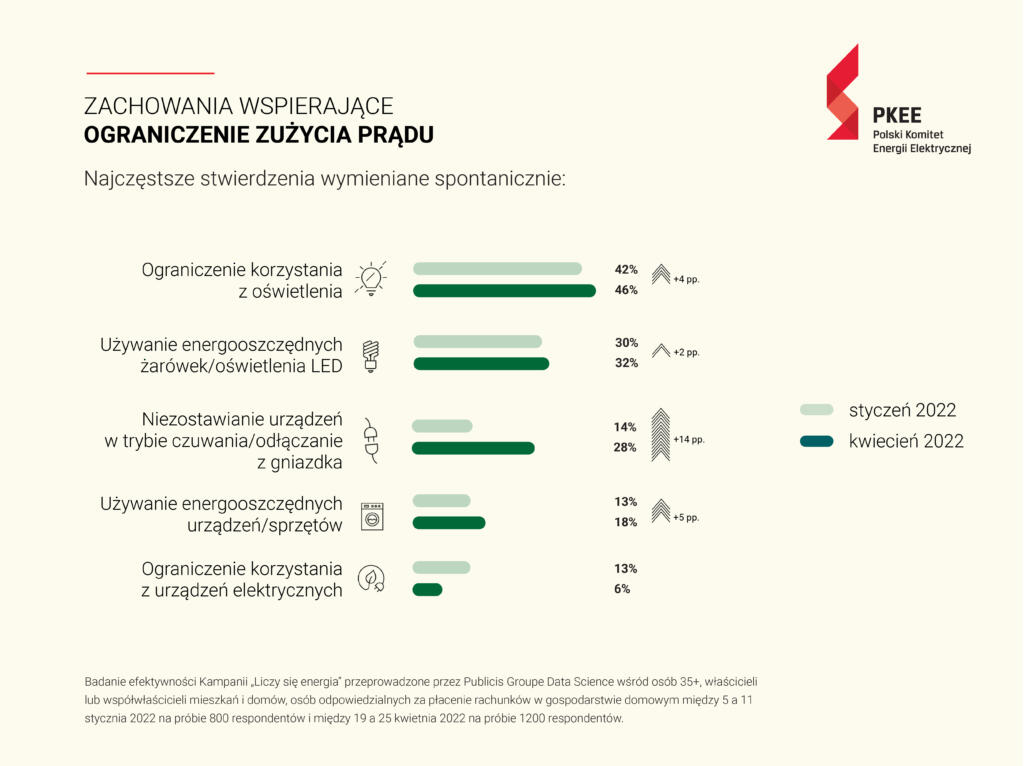 From January to March, the Polish Electricity Association (Polski Komitet Energii Elektrycznej) implemented the "Energy Counts" campaign, whose main objective was to build consumer awareness about rational electricity consumption and factors shaping energy prices. According to a survey conducted after its completion, the Campaign was noticed by 34% Poles.

"As consumers, we have no influence on electricity prices, which are largely determined by commodity prices or CO2 emission rights. However, we can influence our electricity bill. All we have to do is use electrical appliances rationally - switch off the ones we don't need at a given moment and use the others efficiently. We can also use different tariffs offered by energy suppliers, which we can adjust to our lifestyle and time of higher electricity consumption. As PKEE, we want Poles to be aware of their responsibility in this respect. Thanks to the campaign, the percentage of Poles declaring energy savings and their knowledge on the subject increased. More people are also aware that rational use of electricity does not have to mean making sacrifices". - says Magda Smokowska, an expert from the Polish Electricity Association.

Among the implemented ways to reduce electricity consumption, respondents most often spontaneously declare reducing the use of lighting (46% vs. 42% before the campaign), using energy-efficient light bulbs/LEDs (32% vs. 30%), not leaving appliances on standby (28% vs. 14% before the campaign), and using energy-efficient appliances (18% vs. 13%). Significantly, after the campaign fewer people declared that they cut back on using electrical appliances altogether to save electricity. After the campaign only 6% respondents indicated such behaviour compared to 13% before.

Invariably, the main reason prompting people to save electricity is saving money for 83% respondents. Caring for the environment is indicated as the main motivation by 16% of the Poles questioned. Among the reasons for rising energy prices in January, at the start of the campaign, Poles most often cited commodity prices, government policy, lack of investment in renewable energy sources, CO2 emission charges and inflation. After the end of the campaign, in April, the most frequently mentioned reasons include the price of raw materials, the war in Ukraine and its consequences, government policy, inflation, lack of investment in renewable energy sources and CO2 emission fees.

"After the results of the survey we can see that during the three months of the campaign the awareness of consumers both on electricity saving and the rules governing the energy market has increased. The war in Ukraine as a reason for the increase in energy prices is a new factor and despite the fact that the survey was carried out shortly after the start of Russia's invasion of Ukraine, respondents have already included it in their answers" - Magda Smokowska adds.

The results of the survey indicate a growing awareness among Poles of the factors determining the price of electricity, such as energy transition, investments related to the development of renewable energy sources, but also the prices of raw materials and geopolitical mechanisms. The current energy crisis, which is being felt across Europe, points to the growing importance of changes in public awareness, particularly with regard to ecology and energy security, as well as government action to curb rising electricity costs, including additives.

The "Energy counts" campaign was implemented in January-March 2022 by a consortium of Publicis Consultants and MSL companies on behalf of the Polish Electricity Association. Its aim was to strengthen consumer awareness about the possibility of influencing the amount of bills through rational electricity management and to show the objective reasons for rising energy prices.

Research on the effectiveness of the "Energy Counts" Campaign conducted by Publicis Groupe Data Science among people 35+, owners or co-owners of flats and houses, people responsible for paying household bills. The survey was conducted in two waves - at the beginning of the Campaign (5-11 January 2022) on a sample of 800 respondents and after the end of the Campaign (19-25 April 2022) on a sample of 1200 respondents.