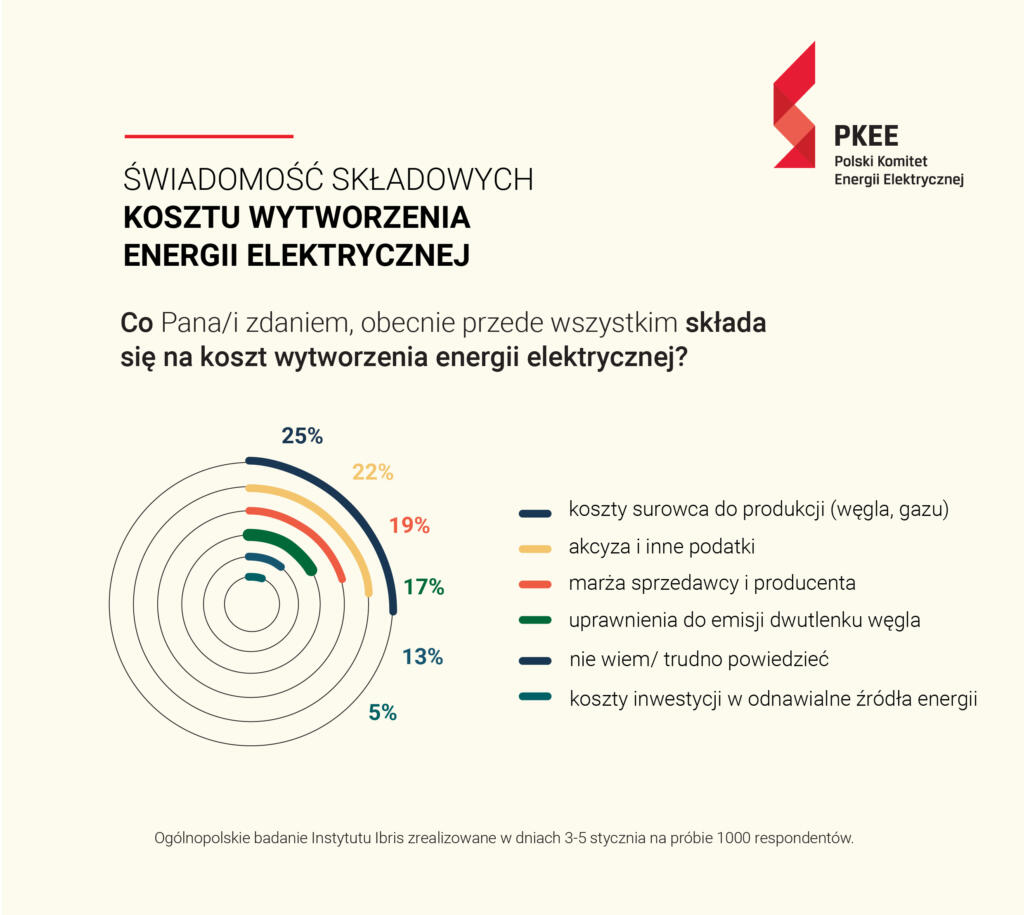 The cost of purchasing CO2 emission allowances currently accounts for the largest share of electricity generation costs. However, they are indicated as the main component of the electricity generation price by only 17% Poles. One in four respondents believes that the main component of the energy price is the cost of raw materials, with only a few less mentioning excise tax and other taxes, as well as dealer and producer margins. In reality, excise duty and margin together account for only 2% of the electricity price.

An IBRiS survey commissioned by the Polish Electricity Association in early January revealed Poles' knowledge of energy prices. When asked about the most important components of the cost of energy production, 25% of respondents indicated the cost of the raw material for production, 22% - excise duty and other taxes, 19% - seller's and producer's margin, 17% - carbon emission allowances, and only 5% - investment costs in renewable energy sources. In fact, according to PKEE's December 2021 calculations, CO2 emission allowance costs accounted for the largest share of the energy production cost structure, at 59%. 25% were other costs related to energy production, 8% - costs of RES and energy efficiency resulting from the EU climate policy, 6% - energy sellers' own costs, and only 1% each were sellers' margin and excise tax. On average, the electricity charge accounts for about half of the bill. The remaining amount is distribution costs.

The interviewers also asked Poles whether they had encountered the concept of carbon trading. 56% answered that yes, they had encountered the term. Men were more likely to say yes (66%) than women (47% positive), and people with higher education and a high or medium level of interest in climate change were more likely to say yes. One in five respondents (19%) answered correctly to the question about the share of the cost of emission allowances in the price of energy. As many as 43% did not answer this question at all.

As many as 61% respondents thought that the cost of carbon allowances is higher now than at the beginning of 2021. 12% said it was at a similar level and 3% said it had fallen. One in four respondents (24%) were unable to answer this question. In fact, between January and December 2021, the cost of CO2 emission allowances, which Polish coal- and gas-fired power plants, among others, have to buy, has tripled from around €30 to €90 per tonne, which is one of the main reasons for the increase in electricity prices.

The results of the IBRiS survey show that Poles are interested in the topic of the energy market and electricity prices and have their own opinions on the matter. Incorrect answers indicating only raw material prices, excise duty or margin as main energy price components may result from transferring market mechanisms from other sectors to the energy sector. The high awareness among respondents of the existence of a carbon dioxide emissions trading scheme is satisfactory. However, the detailed results show that there is still a need to raise awareness of the EU ETS and its impact on energy prices and the economy. With this in mind, the Polish Electricity Committee has launched a website www.liczysieenergia.plThe website shows the factors that have the greatest influence on energy prices. The site also shows ways to reduce electricity consumption and bills.

Based on their intuition, Poles are aware that the cost of CO2 emission allowances has increased over the last year. However, the survey results show that awareness of the "emissions trading" mechanism is not widespread among the public. However, if we take into account the fact that this topic is not often discussed in the public space, this awareness should be considered relatively high. We are likely to see an increase in knowledge and understanding of this mechanism in the coming weeks, as it begins to have a real impact on the lives of the average citizen. In contrast, knowledge of the main component of the cost of electricity generation is quite low, which is not surprising. Due to the current increases, the topic of energy price components is only just entering the wider discussion.