Future of the energy market in Poland. The growing role of the consumer in the energy industry 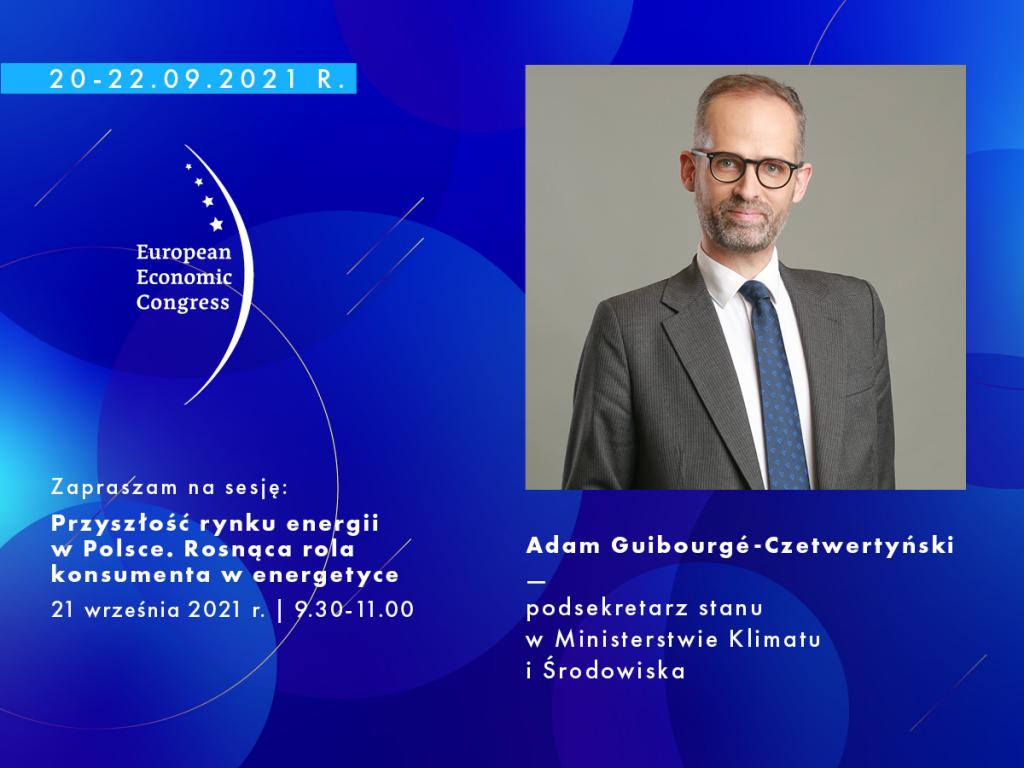 Changes in the electricity market and the impact of the EU policy on the energy transformation in Poland were the main topics of the debate held on 21 September 2021 during the European Economic Congress (ECE) at the initiative of the Polish Electricity Association (PKEE). Representatives of administration, academia and industry organisations discussed the most important issues for the energy market from the perspective of the sector and the consumer.

In his opening remarks, Undersecretary of State in the Ministry of Climate and Environment, Adam Guibourgé-Czetwertyński presented the general characteristics of trends and transformations occurring in the Polish energy market:

- Striving for climate neutrality has become a generator of trends in the energy sector. These include a shift in the generation model from centralized to distributed, which allows for the use of local energy potential and resources and the activation of local communities.

Situation on the energy market

A remedy to the problem of rising prices is now being sought by all countries in Europe. The Spanish government has announced that it expects the European Commission to implement a common European initiative aimed at protecting those most affected by energy price increases. Katarzyna Szwed-Lipińska, Director of the Department of Renewable Energy Sources of the Energy Regulatory Office, referred to this issue, emphasising the inevitability of energy price increases:

- We are seeing a dynamic increase in energy prices. This is a large scale increase, which will certainly translate into the functioning of households and widely understood industry. The legislator and the regulator face a great challenge to create such legal environment that will allow the society to pass through the period of changes that await the Polish energy sector in an acceptable way.

A diagnosis of the energy market situation and reasons for price increases was undertaken by Wojciech Suwała, head of the Department of Sustainable Energy Development at the Stanisław Staszic AGH University of Science and Technology in Kraków. Referring to analyses by The Economist, he also provided examples of countermeasures applied in other countries affected by similar, drastic increases in energy prices:

- In economics, in addition to the current situation, expectations are also important. We will have to invest heavily, decarbonize our economy, and the result of these actions will be increases in energy prices. Energy prices are rising and it looks like this trend may continue in the long term. As this may have a significant impact on the competitiveness of the economy, it is highly likely that the European Commission will take some kind of price-cap action or price caps for generators.

President of Tauron Dystrybucja SA and the Polish Association of Transmission and Distribution of Electricity, Robert Zasina presented the perspective of energy distributors in the energy transition:

- Distribution networks play a key role in the energy transition. As DSOs, we need to respond flexibly to customer requirements and the changing environment. We are challenged by technological and economic development, growing customer expectations regarding reliability and quality of electricity supply, and the development of renewable energy markets, including micro-installation markets. Such dynamic changes require system operators to ensure modern and extensive infrastructure and appropriate technical condition of power equipment.

Another speaker, Marek Kulesa, director of the Association of Energy Trading office, summarised the impact of energy trading, including cross-border trading, on energy prices in Poland:

- Looking today at stock market quotations and related elements, we see that energy price increases will be double-digit. Poland is not alone in this. Increase of demand for energy, increase in prices of CO2 emission allowances and fuel prices are the main factors influencing the increase of costs of energy production.

The postulates formulated by the experts also included the need to protect sensitive consumers and to liberalise the energy market. In response to these suggestions, Katarzyna Szwed-Lipińska informed that the issue of market liberalisation is extremely important and is continuously discussed by the Energy Regulatory Office. However, she could not give any indication as to when such a liberalisation might take place.

The role of the consumer

During his speech, the Director of the Department of Energy and Gas of the Ministry of Climate and Environment, Paweł Pikus mentioned that Poland had a more critical attitude towards the transformation path set by the EU than other countries.

- We see the Fit for 55 Package as a major threat not only to the energy sector, but to the entire economy, particularly in countries such as Poland. Our path of transformation must be safe. It should have the least possible impact on the competitiveness of the economy. It should also support zero-emissions in the medium term.

The need for a thorough overhaul of the energy sector in Poland may necessitate changes in the national energy policy. Mariusz Swora confirmed the need to revise the strategic assumptions of the EU policy and government documents setting out the directions and framework for change:

- The European Commission has abdicated in important segments on which the European energy market was built. The first is competition, the second is security and the third is sustainable development. The EC is currently focusing only on the third element. Directives on energy taxation, energy efficiency and other legislative proposals that make up the Fit for 55 will soon make the entire district heating sector permanently unprofitable.