Nine out of ten Poles say they save electricity 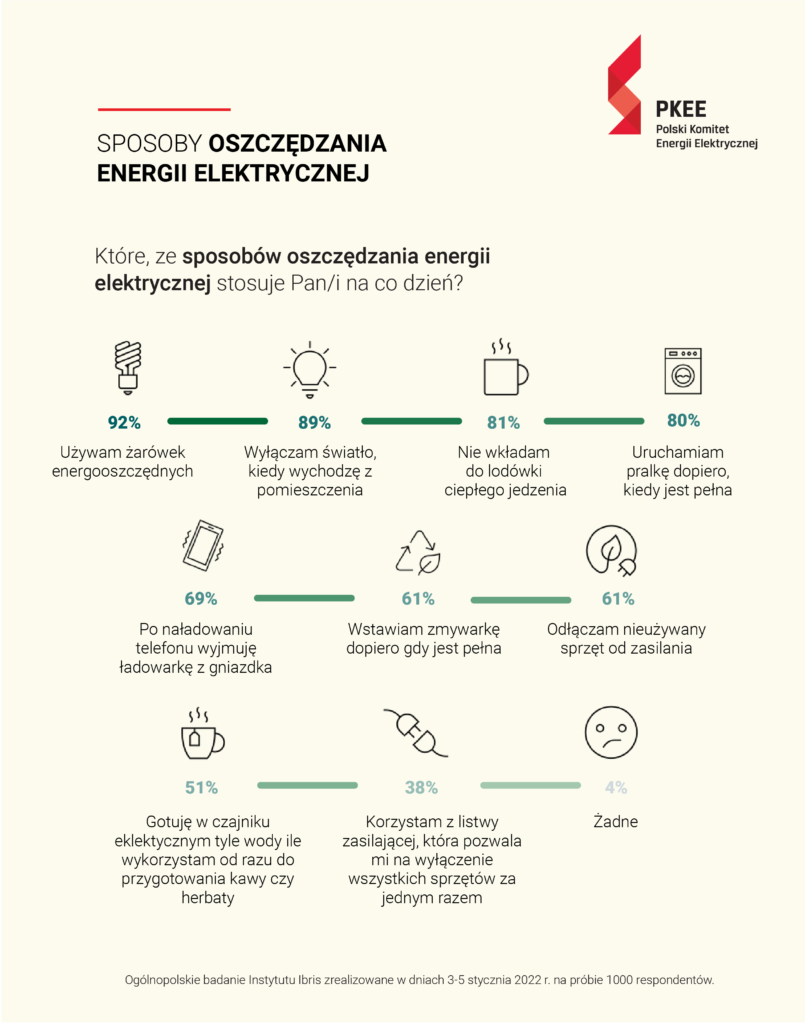 The most frequent ways of saving electricity declared by people participating in the survey were using energy-saving light bulbs (92% declarations), switching off lights when leaving a room (89%), not putting hot food in the fridge (81%), and starting a washing machine when it is full (80%). Fewer indications were given for unplugging the charger after the phone is charged (69%), putting the dishwasher in when it is full and unplugging unused appliances (61% each), boiling the necessary amount of water in an electric kettle (51%), and using a strip to switch off several appliances with one button (38%). Only 4% indicated that they do not take any action to save energy.

81% of respondents declare that when buying a new appliance they pay close attention to its energy class. Among the appliances most responsible for energy consumption, most respondents indicated a washing machine (40% answers), a fridge (39%) and an electric kettle (38%). In fact, it is estimated that kitchen appliances, including heating appliances (induction hob and oven), as well as fridge, electric kettle and dishwasher, are mainly responsible for the highest household electricity consumption.

The survey results show that electricity saving is important to Poles. We are motivated not only by costs, but also by concern for the natural environment. We choose mainly those methods which do not have a major impact on our living comfort, but bring real savings - switching off lights and disconnecting unused appliances from the power source, or optimal use of appliances such as a kettle, washing machine or dishwasher. The good news is the importance respondents attach to energy efficiency ratings when choosing new appliances - as these purchasing decisions have an impact on electricity consumption for years to come. For those who want to learn more about how to reduce their electricity consumption themselves, we have prepared a website www.liczysieenergia.plWe will show you how to reduce your electricity bill simply and without sacrifice.

The respondents are motivated to save energy to a very similar extent by financial and ecological issues. While the former is a quite natural indication, the latter is not so obvious, which may be a reason for optimism. Even if we assume that these are only declarations, the very awareness that even the smallest action has an impact on the environment may be pleasing. Respondents are also quite good at identifying devices that have a significant impact on the overall annual energy costs. This is important because it can translate into future purchasing decisions, e.g. in which appliances to pay particular attention to energy class. Considering that eight out of ten interviewees take this parameter into account when purchasing. It is also apparent that habits such as using energy-saving light bulbs, switching off the lights or putting a full washing machine on have become part of everyday life, and that these habits are only effective when carried out regularly.