IBRiS survey results: Poles only think they know which devices in their home consume the most electricity 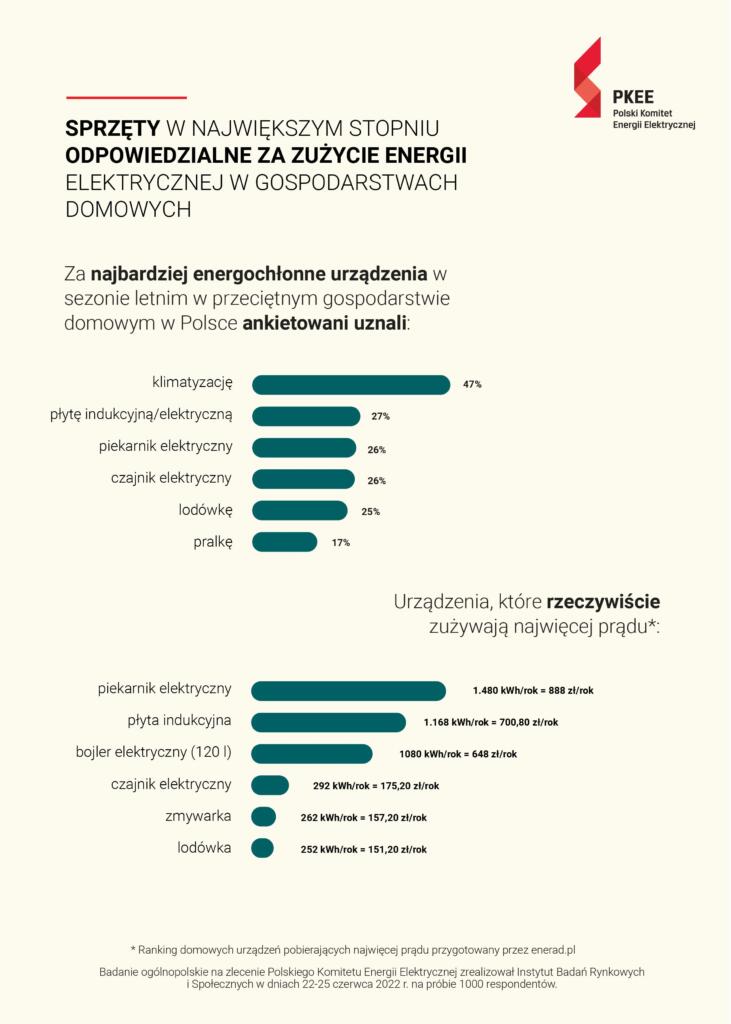 During the summer period, electricity consumption increases significantly. This is due to the fact that this is when many households use air conditioning, fans, as well as the recently so popular intensive lighting of terraces and gardens. However, as consumers, we should take new realities into account in our daily choices, such as the fact that an increase in electricity prices is inevitable in the near future. It should be common practice to use energy rationally and reduce energy consumption as much as possible. This will generate financial savings and strengthen the stability of the electricity system.

Discrepancy between statements and practice

The air conditioner is considered to be the most energy-intensive appliance in the average household by Poles - indicated by almost half of the respondents (47 per cent). In second place was the induction/electric hob (27%). In addition, as many as 26 per cent of respondents considered the oven and electric kettle to be the most power-consuming appliances. One in four respondents indicated a refrigerator, followed by a washing machine and clothes dryer (17 per cent each).

Meanwhile, according to a ranking of household appliances consuming the most electricity prepared by the enerad.pl portal[1]In the case of an average household using the G11 tariff, the devices which consume the most electricity per year, and thus cost us the most, are an electric cooker (according to the list costing over 800 PLN per year) and an electric boiler (over 600 PLN per year). Next in the ranking are an electric kettle (around PLN 175 per year), a dishwasher (over PLN 150 per year) and a fridge (around PLN 150 per year).

However, according to an analysis by the National Energy Conservation Agency prepared for the Polish Electricity Association, the annual electricity consumption of individual appliances can be very different depending on how they are used. For example, the annual energy consumption of 10 halogen lights for an average of 3 hours a day is as high as PLN 262.80. If we replace them with LED lights, it will only cost 35 PLN!

On the other hand, if we decide to buy a smaller dishwasher (45 instead of 60 cm) for 100 washing cycles per year, we will save almost 20 PLN (50.40 PLN instead of 68.40 PLN). And if, on top of that, we decide to wash our clothes at 40 degrees C instead of 60, with 50 washing cycles we will save PLN 20. On the other hand, if we love garden lighting, it is worth considering solar lights, which will not generate any electricity costs.

Sensible use translates into savings

It is worth bearing in mind, however, that both the choice of appliances with regard to energy class and the way in which we use each of them translates into real electricity consumption and, consequently, the size of our household electricity bills. Here are some basic examples:

The results of the IBRiS survey show how necessary it is to have a comprehensive educational programme on how to effectively save electricity, which is being conducted by the Polish Electricity Committee under the slogan 'Energy counts'. All persons wishing to reduce their household electricity bills are invited to visit the website launched by the PKEE www.liczysieenergia.pl, on which you can find information on the factors that have the greatest impact on electricity prices. The site also shows ways to reduce electricity consumption and thus electricity bills.